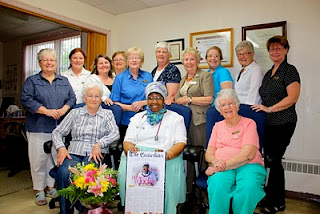 Through all of the early years of SMH, much of the funds for new equipment were raised through popular annual tea parties organized by the Auxiliary. The first tea party was held in the summer of 1950 and raised $1,717.27.
Although the Auxiliary was in charge of these events, the Women’s Institutes of the area deserve a great deal of credit for their success. WI members cooked, baked and worked at the teas, provided afghans or quilts for raffles and items for cake auctions.

Over our years of fundraising, the Auxiliary have held carnivals, teas, dances and bake sales which have raised hundreds of thousands of dollars. These funds have been used to purchase hundreds of items from x-ray machines to thermometers.

Ongoing fundraisers include our annual Christmas Tea, started in 1966, and a raffle for seafood products that coincides with the annual Tyne Valley Oyster Festival.

We presently have nearly 20 members and support the work of the Stewart Memorial Home, which opened in December 2018. We also give scholarships  in memory of Dr. Joyce Madigane to students from the area previously served by Stewart Memorial Hospital who are pursing careers in healthcare. Dr. Madigane was the hospital's medical director and a local family physician for nearly four decades until her death in 2014.

The SMH Auxiliary belong to the Prince Edward Island Association of Healthcare Auxiliaries.

Send Us An Email!!